Kim Tae Hyung, widely known as V, is a member of the South Korean  idol group BTS. He was born on December 30, 1995 in Daegu and grew up in Geochang County. He was the eldest of three children in his family.  He is a good singer, actor, friend, son, grandson, and idol.

If you are a fan of Taehyung, this blog might sound cliche to you, but to new kpop lovers who wants to know more about this amazing guy, here are four out of hundred reasons to love V.

Physically,  Taehyung’s appearance is stunning. He was named as the most handsome face of 2017.

He is a fashionista, his favorite brand is Gucci. He is known for his fashion style of being unique and diverse but consistent. He can pull off any outfit and still looks like modeling in the runway. 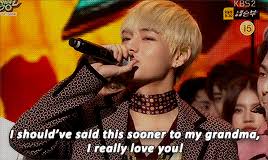 But V is not only beautiful outside, also beautiful inside. He is a loving grandson, he loves his grandmother so much.

ALSO READ:  BTS Love Yourself : Speak Yourself in Saudi Arabia

He is an adorable idol, he even  cutely responded to a letter from a 9-year old boy. Cutie Tata~

And he is an amazing friend, aside from being close to his members, he is also constantly keeping in touch with his wide set of friends. Way to go V, continue being v-eautiful inside and out.

Taehyung ‘s voice is deep. His voice usually stands out because he is a baritone. Very attractive v-oice indeed.

3.) He has a v-ery playful and loving personality.

He loves to play with his facial expressions. From blank face to dorky face real quick. Even his nickname “Tae Tae” is cute.

He also loves to play with children.

He oftens play with Yeontan, his dog. One of the luckiest dog in the world indeed. He loves watching animes and cartoons. It was said that he watched almost all the episodes of Digimon, One Piece, The Girl Who Leapt Through Time, and other works of Director Hosada Mamoru. He loves bubbles.

And of course, he gets angry, he once got angry when he did not got the chance to take a selca with the “Show Champion” tag. Hahahaha.

Actor Kim Tae Hyung debuted in Hwarang. He played as Hansung. He was praised by his great acting skill because he was able to portray the funny and serious side of his character. Just please don’t cry at the end.

V also showed his love for photography when he posted a set of photos including this mirror selfie.

He can play the saxophone. He told on one of his interviews that he wants to be a saxophone artist.

Aside from singing, dancing, acting, photography, playing games, dubsmashing, playing saxophone and more, he also has talent in catching our hearts by just showing us his smile. V-ictory!